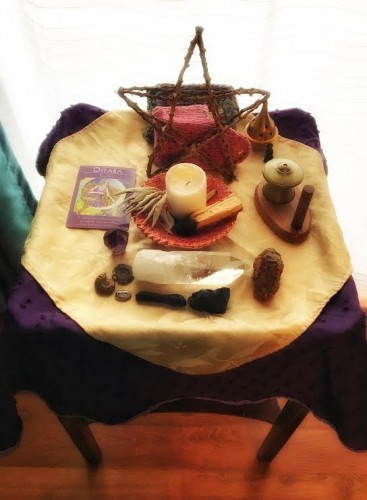 When my mom died and I had to clean up her house, her kitchen sink was clogged. We didn’t get to it right away because, frankly, a sink full of gross water was not a priority in that house. It took a few weeks to drain fully.

Later, as I was sorting through all her old papers, I came across a move out list from when we moved in 1989. This was the house we lived in when she fell apart. It was the worst of all her toxic waste (literally) and her hoarding. She fucked that place up. Once the toilet was broken for I don’t know how long. But we couldn’t call a plumber because of the state of the house. In the move out papers I found that she’d clogged that kitchen sink, too. And then I remembered her telling me that an old landlord of her in the 70’s had charged her for a broken garbage disposal when she moved out.

The woman had serious problems with draining, with letting shit GO. And this is metaphorical as well as literal. She was a hoarder with clogged sinks and grudges that were 30 years old. I feel like the clogged sinks were a desperate cry from the Universe to JUST LET IT GO, WOMAN.

When we first came to view this house, I could tell the woman who owned it at the time was a hoarder. She was clean, but her hallway shower was storage and that’s never a good sign in my experience. I don’t know how I find all the hoarders in the world, but I do, somehow.

Anyway, she put these stupid metal hair catchers in the bathroom sinks and they are forever getting clogged. She couldn’t let things drain, either.

I haven’t done anything about them in almost four years for a few reasons including not really knowing what to do (cause they were STUCK in there), being super busy in other, more important, areas, and, simply, being tired. But today I yanked them out with jewelry tools because that is how I roll and I replaced them with cute little plastic cups from Daiso. I am so ready to let shit drain now. DRAIN AWAY, SHIT. BEGONE. (Certified witchy spell right there.)

I pulled a random goddess card for my altar last night and it was Ostara. Fertility. At first I almost burned it and ran away BECAUSE THIS UTERUS IS CLOSED FOR BUSINESS OKAY (despite the fact that it would have to be the son of god or some shit bc the vagina isn’t exactly a party zone either right now) but then I read the card and it can also apply to the fertility of art, creativity. I read that as: the goddess who motivates you. So, yes, I am choosing to tap into Ostara’s energy of motivation and creativity. I did a deep cleaning of the living room yesterday, pulling all the furniture out and doing battle with the sentient dust bunnies who have been trying to set up civilizations back there. I feel so much clearer in my head without al that dust. I feel so much lighter in my core now that my drains drain. Household cleaning is the same as soul-cleaning and I too often let it go because it feels too overwhelming, despite the fact that I know damn well how much better I’ll feel once I’ve just sucked it up and done it already.

These past few months have been filled with a lot – a lot – of psychological work, much of which has been the Universe’s way of forcing me to do the work of psychologically untangling myself from my mother. I spend so much time and energy worrying about whether I’m turning into her and apparently the Universe has decided it’s time to stop that bullshit and figure it out once and for all. So I’ve been tested by being put in triggering situations that mirror my own traumas and I’ve worked it out each time. When I used to knit more often, sometimes I’d have to untangle yarn. Sometimes I’d have to untangle a whole skein of yarn. I’d declare THE YARN NEVER WINS and it never did. I untangled it every time (except one time, but that was some of that fancy yarn with fringy stuff and so that doesn’t count). That’s what this felt like. I’d struggle with it, and then suddenly, I’d find the key knot and I’d feel it loosen and come undone. And just like that I was me and she was she. And – surprise! – turns out I’m not my mom.

It’s fitting that I’d finally get around to making my drains drain after all that. It was like closure on this chapter of the psyche work I’ve done recently (KNOCK WOOD, UNIVERSE, PLEASE NO MORE PSYCHE WORK FOR AWHILE OKAY). I untangled myself from the shit, and now I’m washing the shit away. Furthermore, I’ve worked to redo my drains in such a way that they won’t clog again. The little cups I’ve got in them are easier to clean, and semi-disposable. In the mean time I’m looking for a more permanent solution, but the point is that things are flowing away again. Just as they should be.

It’s been just over two years since my mom died. But I could swear it’s just been one.

I mean, I can account for all the time that passed, and I remember things that happened in that time, but somewhere along the way I feel like I essentially lost 2012. It’s okay. It sounds dramatic to write it out like that, but I assume it’s just part of what grief is.

Well, and recovery from The Worst Year Ever. In 2011 my ex-husband and I split up and just as I was getting my life in order, my mom died leaving me her only heir to clean up her mess (literal mess – it was a hoarder’s house), while in the middle of that (luckily I had wonderful people help me with it) my face and hands suddenly went numb for some reason. I swear I was living Betty Draper’s life what with the dead mom and numb hands. WTF, even? I mean. Of ALL the fictional worlds to mimic, my life goes with Mad Men? NO, LIFE, NO. PICK HARRY POTTER INSTEAD, MKAY?

And so when 2011 was over… I mean. I don’t even honestly know. 2012 happened, somehow. I went to Disneyland a lot. That was probably just as effective as Prozac. I wasn’t really depressed, or maybe I just wasn’t severely depressed. But I certainly wasn’t exactly awake. There were some dark times. The anniversary of her death hit me really hard and most of July was bleak. I braced myself this year for another difficult summer, but it wasn’t nearly the same. It was okay. And I’m sure it would have even been normal except that I’ve spent all of this year holding my breath for other reasons.

I feel like I’ve essentially lost a couple of years now. Things are so different, I don’t even recognize my life from three years ago. I’ve had to let go of a lot. For practical reasons, as well as out of kindness to myself.

I remember when I was a kid I had a list of things that would make my life perfect, or that would mean my life had begun. I know better now than to think life isn’t happening all the time. I may wait for certain things, but I don’t stop living while I wait.

Even so I feel a little like that that younger version of myself now. Like I’ve spent the last two, almost three years, waiting. And that’s not such a big deal for me as an adult with many years under my belt, but three years is a massive chunk of my kids’ childhoods and I feel a little resentful that it’s been stolen from me or them or us or someone. Or no one. I don’t think my kids have noticed, really. But, because of grief, these last few years have been sleepy and surreal for me, and I guess that colors my perception of things.

But now I’m a student. And I am probably/hopefully/most likely/with any luck moving soon to a place of my own. And my divorce is final now. And, I’m a little bit hesitant to say it because of the way the last few years have felt, but I almost feel like my life is about to begin.

Life isn’t what they tell you. It’s not grow up, go to college, fall in love, buy a house, have the babies, be happy, do good in the world, die a peaceful death when you are old and have lived a good long life. It’s grow up in a fucked up alcoholic-hoarder home, feel too stupid to go to college, have zero plans, be essentially asleep in life, get married, have the babies, accidentally start a feminist movement online, finally wake up, get divorced, lose your alcoholic-hoarder mom, go back to school, try to buy a house, live until you are eleventy-one making a difference in the world all the while. It doesn’t look at all like I was promised when I was a little girl. Life isn’t neatly packaged. It’s awkward and convoluted and messy. Life isn’t linear. Life is a web, everything connected to everything. And that’s okay. That’s beautiful. But you have to know what you are looking at to see the beauty. If you expect linear, a messy web isn’t going to look nice. Expect the web. Know now that life is messy and that makes it beautiful.