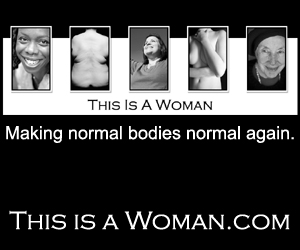 On July 5, 2006 I started The Shape of a Mother.com. News of the site spread like wildfire online and within a month of its conception, it was known internationally and it was being featured in various media outlets across the globe. This was big. Such a response indicated that this was something desperately needed by women in our society. That we’d been imprisoned in our shame for too long and that seeing real images of other women was our key to freedom. To know not only that our bodies fall somewhere on the wide spectrum of Normal, but that maybe, just maybe Normal is Beauty, was an empowering concept.

This is a Woman opened in 2011. A year that turned out to be my worst one ever. Like. Seriously bad. So I had to focus on Life and all it entailed rather than promoting and supporting TIAW the way it needed me to. I saddled myself with guilt for not getting the site’s name and mission out there more, but, to be honest, I’m still catching up from 2011, and of all the things I desire to do with my life, begging ladies to get naked and write about it isn’t the biggest one right now.

What I do want to do right now is write more. I want to write more about feminist issues, but also about other things that don’t necessarily fit here at TIAW. Things like the weird foods my family eats (beet hummus, you guys – so good), the TV shows I get philosophical about, and the crazy things that happen in my day to day life.

So! I’m marrying the two. I’m keeping up the Weekly Awesome (but probably under a new name – I’m thinking Feminist Fridays) and the occasional post I write about Lady Stuff, but I’m doing that here now. TIAW’s Pinterest and Tumblr still exist and are active at the links below, and the Facebook page will represent both blogs as well. SOAM isn’t changing at all. If all you want to read is the TIAW stuff, make sure you like the Facebook page, I’ll post links to all the entries there.

Thank you for being there for TIAW. Here’s to new beginnings!