Where You and I Rename the Weekly Awesome Together

BY bonnie /This is a Woman /9 Comments 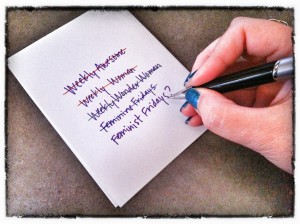 Over at TIAW, I posted a weekly roundup of all feminist and body-image related stuff which went under the name of The Weekly Awesome. The name always bothered me, though. Because some of the items were not awesome at all; they were angering. But I hesitated to change the name because I didn’t want to insinuate that anger isn’t a good thing when it’s necessary. My thought-process was something like this:

I don’t want to call angering things awesome because “awesome” brings to mind something uplifting.

But anger is important and necessary to fight the things that make us angry. And that’s kind of awesome.

But it bums me out and I don’t want to hear that something’s going to be awesome which leads me to expect Happy Things only to be bummed out.

But I feel strongly that anger is also awesome when it’s necessary and lord knows it’s so often necessary in these issues.

I. Um. May over think things. A little bit.

Eventually my circle of thoughts would spin so fast, I’d go flying out and land in a pile in the corner dizzy and needing more coffee or chocolate. Or chocolate coffee.

I considered divvying them up sometimes to keep them separate, but there was really no way to know if I’d get enough items each week to necessitate both. And I didn’t want to sit on them to collect enough for a post.

And, really, isn’t life all messy and awkward anyway? Life isn’t divvied up all nice and neat. And I am constantly trying to remember that in my life and in the projects I do.

Therefore, I’m changing the name. I’m overly partial to alliteration for some reason so right now I’m leaning towards Feminist Fridays, but I’m also worried that might sound a little dry. So I’m asking for your opinions. What do you think we should rename this weekly post?