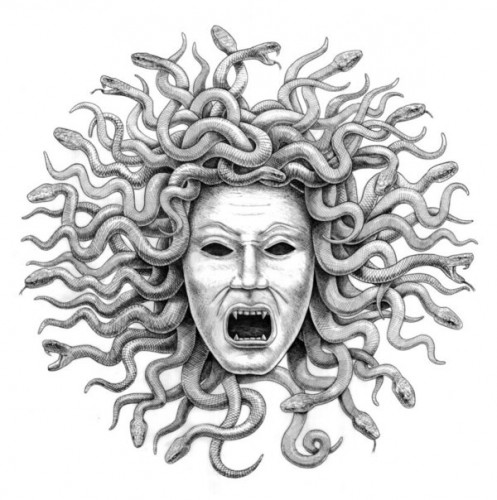 “[Who] hasn’t been ashamed of her strength? Who, surprised and horrified by the fantastic tumult of her drives (for she was made to believe that a well-adjusted woman has a . . . divine composure), hasn’t accused herself of being a monster?” (Cixious 876).

We are raised by the patriarchy, carefully tended, wings and instincts clipped so that we cannot escape or even think. We are crippled in our minds, confused. We believe what they tell us even though it feels wrong. Instincts, we are taught, are not scientifically based, not “real.” So we discredit them and disassociate.

“A feminist becomes she even if she has already been assigned she, when she hears in that word a refusal of he, a refusal that he would promise her inclusion” (Ahmed 4).

“I think of feminism as poetry; we hear histories in words; we reassemble histories by putting them into words” (Ahmed 12).

We see that the world is wrong. We understand that we need to fix it, but we don’t know how, and we are afraid of how we may fit into it when we are finished.

We begin trying to speak up and are laughed at, silenced, threatened, or attacked. It is not safe work.

L’Engle talks about how every act of creation is risky, dangerous, even while it is worth it. “Creation is still wildly beautiful, and it is still wild” (L’Engle 16).

“’To assess the damage is a dangerous act,’ writes Cherrie Moraga. To stop there is even more dangerous” (Anzaldúa 169).

And so we keep going.

To become feminist is to disassemble oneself. To look around the room and see your various parts strewn about. It is unsettling. It is alarming. You have no manual. How do you go back together?

“Perhaps when you put the pieces back together you are putting yourself back together. We assemble something. Feminism is DIY: a form of self-assembly” (Ahmed 27).

“So I cut and paste and line the floor with my bits of paper. My life is strewn on the floor in bits and pieces and I try to make some order of it. . . ” (Anzaldúa 169).

There is no going back, you cannot fit the parts back together the original way, you must find a new way now.

“Feminism involves a process of finding another way to live in your body” (Ahmed 30).

We must rewrite our body. We must stitch it back together like the Patchwork Girl.

“I see that your scars not only mark a cut, they commemorate a joining” (Jackson).

Sometimes, we must share body parts and become one, covered in lines, crisscrossing. Another form of skin-writing.

“Scar tissue does more than flaunt its strength by chronicling the assaults it has withstood. Scar tissue is new growth. And it is tougher than skin innocent of the blade” (Jackson).

Put back together, we need to bring ourselves back to life because, at our core, we still need work. The patriarchy has done quite a job on us.

“I began to realize what I already knew: that patriarchal reasoning goes all the way down, to the letter, to the bone” (Ahmed 4).

La Loba, Wolf Woman, collects bones. “Her cave is filled with the bones of all manner of desert creatures: the deer, the rattlesnake, the crow. But her speciality is wolves.” When she has a complete skeleton “she stands over the criatura, raises her arms over it, and sings out. That is when the rib bones and leg bones of the wolf begin to flesh out and the creature becomes furred. La Loba sings some more and more of the creature comes into being; its tail curls upward, shaggy and strong. . . . La Loba sings so deeply that the floor of the desert shakes, and as she sings, the wolf opens its eyes, leaps up, and runs away down the canyon” (Estes 25-26).

Once ourselves are healed and whole, again and for the first time, we can see that hysteria is not a problem just as the womb, the hystera, is not a problem. Now we we get to work.

“Her appearance would necessarily bring on, if not revolution . . . at least harrowing explosions” (Cixious 879).

“You only have to look at the Medusa straight on to see her. And she’s not deadly. She’s beautiful, and she’s laughing” (Cixious 885).

You have gotten past her snake hair. You can truly see her. Why? Because you chose to look at her straight on.

What’s more is that you are not seeing the Medusa, you are seeing you. She is the mirror that was supposed to be her downfall, but that part of the story was a lie because the Medusa always saw herself through truth. The mirror, for Perseus, was his shield, metaphorical and literal, his tool for gaslighting. He saw her hair as snakes and thought it would scare her as much as it scared him so he showed her who she was. Naturally it did not, and so he used it to avoid having to see her straight on, to avoid seeing her truth, her mortality, her beauty and her emotions. Using a mirror allowed him to remain unengaged in the interaction, he remained on this side of the Looking Glass, avoiding crossing into the realm of understanding and growth. Who was really gaslighting who?

To look at Medusa straight on is to see all of this.

We have disassembled ourselves, laid the pieces out, and stitched ourselves back together, singing over our bones to bring us back to life. And now we become the Medusa. We take her crown of snakes and place it atop our own heads in our coronation ceremony through which we become truly ourselves. We reclaim our feminine words and shout them to the world: hysteria! pussy! cunt! bitch! We reclaim our emotions and refuse to be ashamed of them any longer: we cry, we rant, we scream, we rage! Heads turn, confused, because the uninitiated do not know what to make of this spectacle, this sensation. “Feminism is sensational. . . . When you speak as a feminist you have to deal with strong reactions” (Ahmed 21).

And now what? Now, we write.

Write yourself into existence. Write on you, write you on paper, on walls, on canvas. Speak the language of watercolor and oils and HTML. Become the hypertext; you are the cyborg that is one and all.

Is this, the last form of the feminist, the end?

Dear god I hope not.

The moment we are “finished” with ourselves, we die internally.

It is not easy to be the Medusa, to refuse to be ashamed of those parts of us that we are demanded to shame. “To expose a problem, you pose a problem” (Ahmed 37). It is hard work and it is exhausting. All psyche-work is spiral-shaped. Sometimes you will come back around and need to re-disassemble yourself all over again. Sometimes you will need to forget how to be the Medusa. “No wonder feminist work is often about timing: sometimes we are too fragile to do this work; we cannot risk being shattered because we are not ready to put ourselves back together again. To get ready often means being prepared to be undone” (Ahmed 27). Sometimes we hibernate mid-spiral, sometimes we power forth. But each time around we come closer to being wholly comfortable as Medusa.

This is the gift we give to our friends and to the next generation: a template for becoming the Medusa and a community in which we can comfortably be gorgons together, doing our gorgon work together.

We’ve come back from always.

Anzaldúa, Gloria. “Speaking in Tongues.” This Bridge Called My Back Writings by Radical Women of Color, edited by Cherríe Moraga and Gloria Anzaldúa, SUNY Press, 2015.