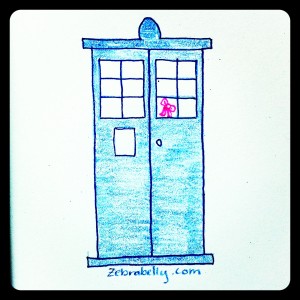 If you are a Whovian you probably know they’ve announced the actor who will play the next Doctor, after Matt Smith leaves the show later this year. If you are not a Whovian, you might want to keep reading anyway because this deals with more than just nerd stuff. If you don’t know what a Whovian is, get thee to Netflix right now and start watching Doctor Who. You’re welcome.

Brief summary for non-Whovians: The Doctor is a time-travelling alien (known as a Time Lord) from the planet Gallifrey. Instead of dying, the Time Lords have the ability to regenerate into a new body. This process happens with various levels of control involved – the Time Lady Romana chose her second incarnation, the Second Doctor was offered a choice of several images by the Time Lords as part of a forced regeneration (SPOILERS), and the Ninth Doctor calls it a “dodgy process” and states that me might wind up with two heads, or no head at all. My understanding, or feeling, is that the amount of control over the process is in proportion to how much one is injured at the time, or how rushed the process is. Since the Doctor is nearly always dying when he regenerates, he has very little control over how he winds up looking, and it is insinuated that he’s just lucky to have so far always had the usual number of limbs.

So the debate, then, is what happens if the Doctor regenerates as a woman?

He’s not going to just yet – the next actor to play the Doctor is also a man. While I’d love to see the Doctor played by a woman someday, I really am relieved it’s not happening right now because the current head writer of the show is fucking sexist as hell. I don’t want him having any control over a female Doctor, and I don’t want him in charge of setting the precedent. Luckily, he seems to be against the idea of the Doctor regenerating into a woman anyway; yesterday he gave this quote: “I like that Helen Mirren has been saying the next doctor should be a woman. I would like to go on record and say that the Queen should be played by a man.” WHAT EVEN THE FUCK, MOFFAT?

Here’s a great post listing all the reasons Moffat is a douchebag.

But that’s not what I wanted to write about today. There are plenty of posts about why we need a female Doctor (and probably just as many posts arguing that he should always be male). What I wanted to share was the process I went through before accepting the idea that he might someday switch genders.

I think we, as humans – actually, perhaps more correctly, within our collective society – are more strongly tied to gender than the Time Lords must be. I know the Doctor as a man. He has always been a man. We become tied to the identities of the people we know. I suspect this is mainly cultural – if a person wants to change their first name, they are met with resistance from the people around them, yet if a woman wants to change her last name when she gets married no one bats an eye. Changes to one’s identity are accepted so long as they fit within the norms we’ve been raised with. To have cultural norms is human and not necessarily always a bad thing, but we must keep in mind what is and is not cultural when we approach new experiences. So, culturally we feel the need for people to remain as they are; we feel safer in a world we know. Major life changes are upsetting, even if they wind up being okay in the end. That was the first aspect of things I needed to face. Just because I know the Doctor as a man doesn’t mean he won’t still be the Doctor as a woman. He is somewhat different in every incarnation – sassy, silly, dark, or light – but he is always the Doctor. He always loves humans, he always fights for good and peace and love, he always carries darkness with him, he’s never ginger, I’m always in love with him. Being a woman really won’t change any of those eternal aspects.

But, I reasoned, he calls himself a man. Therefore he must identify as a male. And then I began to think about this on a level that only the truly nerdy ever contemplate fiction with. Because English – or any human language – is not the Doctor’s native language. If the Time Lords have a biological ability to regenerate into other genders, I assume their language must deal with this in a uniquely Gallifreyan way. Sweden has recently adopted a gender-neutral pronoun into their language; it’s not an impossible concept. So the Doctor translates his language into what fits best with the people he’s surrounded by.

I think it boils down to the fact that we humans don’t have this biological ability built into us so it makes it hard for us to comprehend the idea that it might be a part of another species. Our discomfort with it is our issue, not the Doctor’s. Knowing that and embracing it – the idea that it IS hard to wrap my brain around – made it easier for me to wrap my brain around. Embracing my limits as a human enabled me to expand them. Which is some sort of inside-out catch-22 or something. It’s like a mobius strip of thinking (possible new tagline for this blog).

Besides, the subject has been broached before when Joanna Lumley played (one of) the Doctor(s) in this Red Nose day comedy bit that you need to watch right this second because it is awesome.