It has been a lovely weekend. 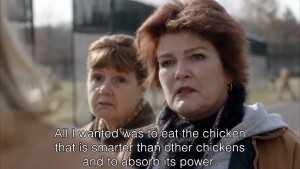 Bethany’s all, “Why are you, like, taking pictures of… yourself? That’s so weird.”

KIDDING. Cause, see, I met Bethany through 7 Days.

Spent the afternoon with Bethany, her mom Debbie, and Jen. And some kids.

We:
~Drank coffee.
~Looked at Google Maps and compared Omaha to San Diego (what? that’s normal)
~Edited photos (mostly they did, but I Instagrammed something)
~Laughed
~Tried to name my proxy owl
~Did an entire musical dance routine to make up for the lack of theme yesterday

One of those is an elaborate lie.

(7 Days is a quarterly self-portrait group project I have taken part in for the last sixish years. One selfie a day for a week.)

1. My name is Bonnie. In 5th grade I smooshed my first and middle names together into Bonnianne, thinking someday I’d change it legally. I never did (yet?), but in the 90’s there was a porn site under the same name.
2. I have two kids. They are awesome and hilarious and weird and exhausting. Which is pretty normal for kids, I guess.
3. I’m going back to school. I’m aiming towards a career. A career in what, I do not know. Do they pay people for being cute as hell?
4. I hopeschool my kids. Nope. That’s a typo. I hoMeschool my kids. But it’s a pretty appropriate typo. I do hope I school my kids.
5. I’m tall. And lately I’ve become obsessed with celebrity heights. Did you know I’m two inches taller than Robert Downey Jr? I KNOW, RIGHT?
6. I knit. Sometimes I knit sea monsters. I have never knit a sweater. That sounds strange now that I type it out.
7. Hobbies I’ve inherited in the last couple of years: beading/jewelry making, sewing, rocks. If “rocks” counts as a hobby. It mainly involves owning rocks and not really knowing how to handle that.
8. I never learned how to roller skate. I mean without clinging to the wall for dear life.
9. But I practically lived on my bike. Also I had a scooter like this one.
10. I love camping.
11. And hiking.
12. But I hate team sports.
13. My car is red. And cute. And named Romana.
14. I’m afraid of heights, and escalators, and spiders that are on me or might get on me, and vomit. And other things which are scary to everyone like clowns or ventriloquist dummies.
15. I am an anxious person on the whole. Sometimes I suffer from actual diagnosable anxiety.
16. I’ve also dealt with depression.
17. I am geeky about these things: Douglas Adams (Hitchhiker’s Guide and more), Madeleine L’Engle, Doctor Who, Muppets, and Harry Potter. Among other things.
18. When I was a kid I geeked out so hard on the Baby-sitter’s Club that I actually still have their whole neighborhood map memorized. Ish. That makes me sound like a creepy stalker. Except that they aren’t real and technically they were at least a couple of years my senior at the time. WHO’S CREEPY NOW, KRISTIN AMANDA THOMAS?
19. If you got that joke you are now my new BFF.
20. It was a totally canon map of their neighborhood, BTW. It came on an official calendar. None of that fanfiction shit here. Oh no.
21. I’m actually not against fanfiction at all. I just like the word “shit”. (*wonders if there’s any BSC fanfiction around*) (OMG THERE IS.) (FEMSLASH. OMG KRISTY AND SHANNON. IT ALL MAKES SENSE NOW.) *ahem*
22. I have specific rules for where periods go in relation to quotes, as evidenced in the previous line item. They look stupid inside quotes when it’s just one word. So there.
23. After a certain number of items, this sort of thing tends to become a stream-of-consciousness, doesn’t it?
24. I was raised Christian (fundamentalist, even, although most of the political stuff I never agreed with) but at some point nearly ten years ago now, I realized I’m actually not a Christian at all. I now follow the Pagan wheel of the year.
25. I still think Jesus was a pretty awesome person, though, and had some kickass ideas.
26. I don’t wear high heels very often. Partly because I am the aforementioned Kind of Giant.
27. I did, though, recently buy eyeliner and mascara. I’m basically fully goth now.
28. OMG HAVE I EVEN MENTIONED THAT I LOVE COFFEE? How did I get this far in and not mention it? ACK.
29. Also, I love Disneyland. I should have added that to the Shit I Geek Out Over List. Too bad there’s no edit feature or anything.
30. I’m really lazy. And sarcastic.
31. My family was rife with mental illness and alcoholism.
32. As far as I can tell I’m pretty sane. Depression and anxiety aside, of course.
33. I think I might hate the number 33.
34. But I love the number 42. (See line item 17.)
35. This is my current age (I mean 35, not 42).
36. I first went online when I was eight. In 1986. My username was “OverEight”. Long, stupid story. OK, not that long. My mom’s was “OverThirty” and I didn’t know what else to pick.
37. I guess we weren’t allowed spaces back then. Or maybe we were but I just forgot. I mean. It was 100 years ago.
38. I love hyperbole.
39. My mom was kind of a big computer nerd, I guess.
40. Someday I’ll tell you about all the life hacks she came up with to help us survive the 1980’s.
41. I am not afraid of getting older. But that doesn’t mean it’s not fucking weird.
42. I approve of bad words.
43. I have a cat. Her name is Leia and she is properly weird.
44. For many years I wasn’t allowed to have a cat, but I can now and I hope I always will from now on.
45. Growing up I had cats, hamsters, rats, fish, and birds. Mostly named after musicians of the 90’s.
46. I don’t have blond hair, but I usually forget that.
47. My eyes are hazel-green.
48. I have freckles and dimples. I approve of the former more than the latter.
49. I am socially awkward and weird. But hopefully adorable enough to make up for that.
50. My birthday is on Groundhog Day.

And I think that is where this list ends. I know these usually go to 100 or 101 ro some other 3-digit number, but let’s face it: My attention span isn’t that long and you’re probably already bored. Let’s keep some of the mystery awhile longer. *bats eyelashes coquettishly and dons mysterious cape* (I’m not sure those things usually go together. This may be part of my awkward weirdness.)